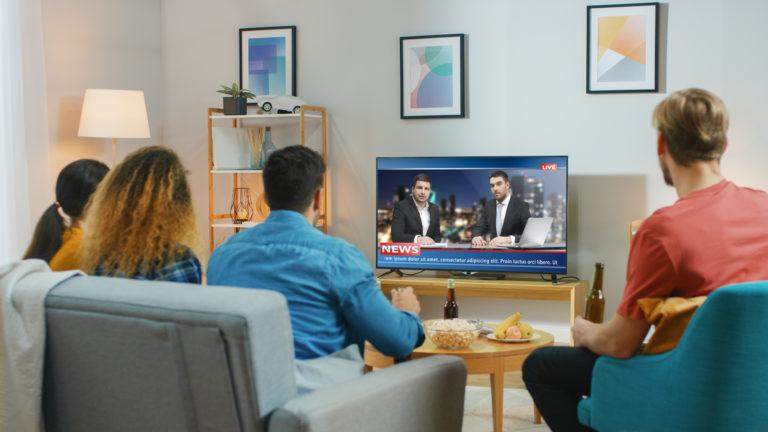 We’re definitely at a time in history where current events reporting happens at lightning speed, and the news truly has evolved into a 24/7 cycle. But you used to have to subscribe to cable or satellite services to get a 24-hour news channel. Now there is another option: Newsy, the country’s first 24/7 news channel available for free on over-the-air TV.

What Exactly Is Newsy?

Newsy is available to more than 90% of American television homes through its over-the-air service, streaming app and cable connection. The full-time news network, owned by The E.W. Scripps Company, has been on the air since 2008 showcasing opinion-free reporting on the latest news from around the country and the world. Based in Atlanta, Newsy has 14 news bureaus around the country to provide in-depth coverage of breaking news.

The channel launched over the air almost a year ago. It’s currently available on every major over-the-top (OTT) and connected TV platform and provides 17 hours of news per day. It’s the only American news network to be both OTA and OTT.

“We have built a team of strong storytellers, anchors, and reporters with a goal of making journalism as enjoyable, relevant, and interesting as it is important,” said Kate O’Brian, head of the news group for Scripps Networks, in a press release from that launch. “Our promise will be to provide the objective journalism that Americans are seeking.” The Newsy Difference In 24-Hour News

Newsy provides free access to around-the-clock news coverage and programming. Whether you have an OTA antenna, a smart TV, or a streaming device such as Roku, Apple TV, Sling or Amazon Fire, you can access Newsy 24 hours a day at no cost. Newsy.com has a comprehensive list of where to watch the network, no matter how you tune in.

Newsy is clear in its commitment to focusing on fact-based reporting and avoiding opinion-based reports or programming.

“With persistent curiosity and no agenda, we strive to fuel meaningful conversations by highlighting multiple sides of every story,” the network states on its official website. “Newsy delivers the news and perspective you need without the hype and bias common to many news sources.”

Throughout the day, Newsy offers everything a die-hard news fan wants. A viewer can get a simple rundown on the day’s top stories or sit back and enjoy their current events in a morning show format that blends national stories with local spotlights on people making a difference in the community. Newsy also airs documentaries, investigative reports, and hosted shows that offer deeper dives into the whys of breaking news stories, as well as getting to know the people who are making the news. Just in time for the 2022 election season, Newsy and the Washington Post announced a partnership for a new broadcast. “Election 22: What Matters” began airing on Sept. 9 on Newsy to kick off the height of midterm election season.

The 30-minute political show airs weekly at 8:30 p.m. on Fridays for nine weeks, according to an official press release from Scripps. If viewers miss the live show, they can watch re-runs on Saturday and Sunday at 7 a.m. to catch up on the most recent episode. Repeats air through Nov. 6.

Each week, “Election 22: What Matters” intends to look at a different topic related to the upcoming election. One week the show might feature the economy while other weeks might focus on healthcare, education, and other relevant issues.

One element of this show that sets it apart from others on the air is how it relies on coverage from outside of Washington D.C. According to the official press release, reporters working for the show will be based in Georgia, Arizona, and Wisconsin, and other journalists on the Post’s national staff will also contribute. This, in conjunction with reporting from Newsy’s 14 bureaus around the country, should provide a wide-range view of the issues facing the electorate.

“Through a combination of our newsrooms’ resources and our reporters’ on-the-ground interactions with voters, this show will get to the heart of what Americans care about this election,” said Micah Gelman, the show’s video director and a senior editor at the Washington Post. “We feel strongly about highlighting communities and perspectives that are often left out of these important moments and look forward to extending this coverage to Newsy’s vast digital and TV audiences.” With Newsy, TV watchers are getting a resource that adds value to the OTA offerings available to them, and without the bias that certain news networks are known for. If you want to keep your viewing options open heading into the election this November, Newsy gives viewers another reason to set up an antenna and start enjoying free OTA television.